Animal facilities in the path of Florence pose threats to public health.

As Hurricaine Florence approaches the North Carolina, the state’s Pork Council is playing down the environmental threat posed by the anticipated leaking of waste lagoons. Storing manure in an on-site pit is a common practice in animal agriculture and North Carolina. The state has 4,000 lagoons, which are disproportionately likely to be in poorer, non-white communities, where the lingering manure is related to poor respiratory health and children’s asthma. This past April, neighbors of hog farmers were awarded $50 million as compensation for experiencing the noxious smells of neighboring hog farms. 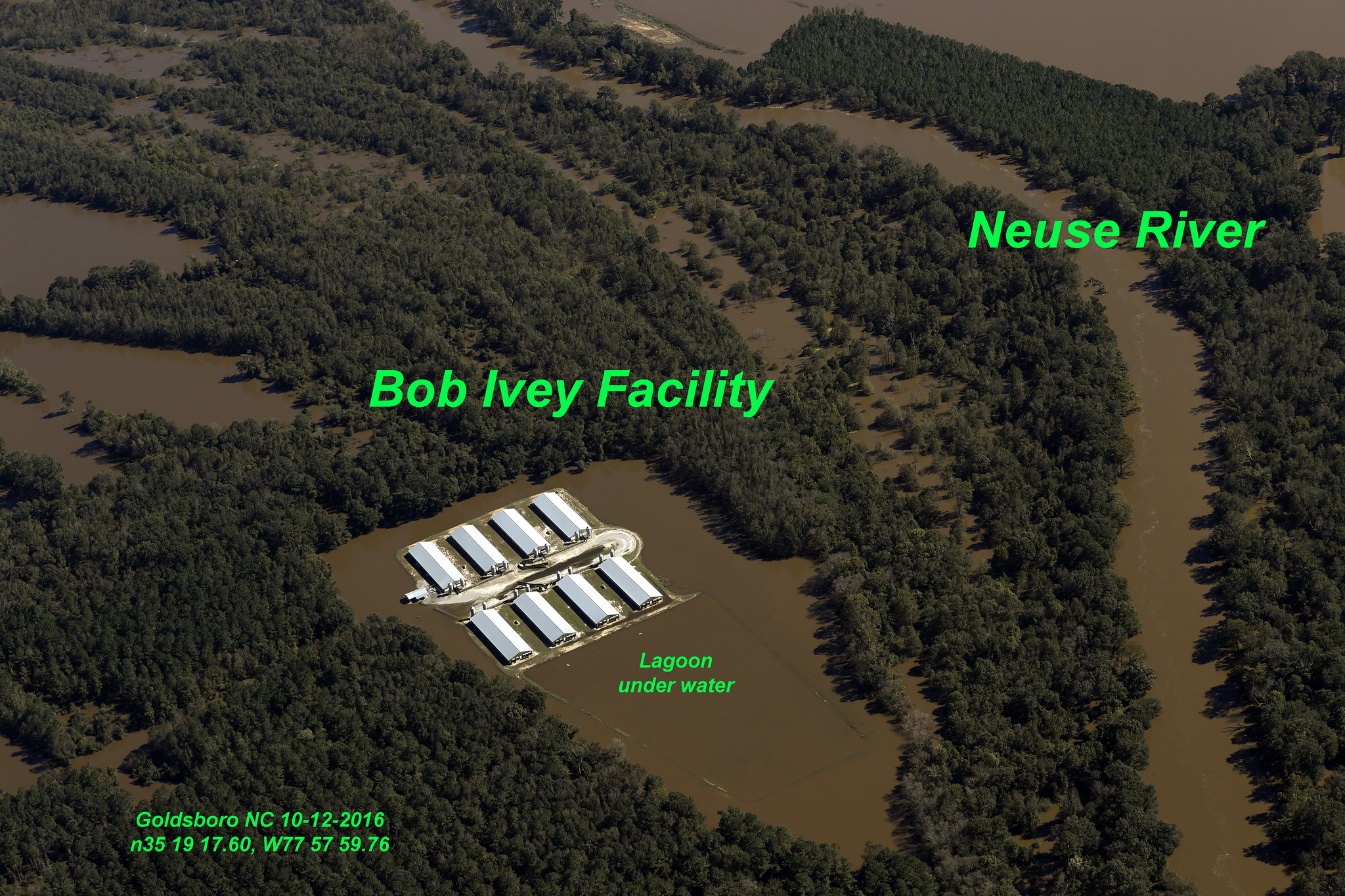 When hurricanes hit, these open pits of waste are susceptible to flooding, and the animals on-site may be drowned. According to the Pork Council, the 1999 Hurricane Floyd flooded 50 lagoons entirely, breached 6, and killed over 21 thousand swines. Hurricane Matthew in 2016 flooded 11, and killed nearly 3 thousand swines. If you’re wondering why these waste lagoons are on the hurricane path, grist’s Nathanael Johnson had the same question, noting that the biggest steps to solve the problem include the state’s ongoing buyout program:

The coming days will be informative of whether this program has mitigated hurricane lagoon damage. Because only 42 of the thousands and thousands of lagoons had been bought as of 2016, it seems that this program will not be able to afford to make much of a dent in the waste problem.

In exploring the relationship between hurricanes and animal agriculture waste, I examined the National Centers for Environmental Information’s International Best Track Archive for Climate Stewardship (IBTrACS) and the Environmental Protection Agency’s Toxics Release Inventory (TRI) Program to compare the path of hurricanes Fran, Floyd, and Matthew. 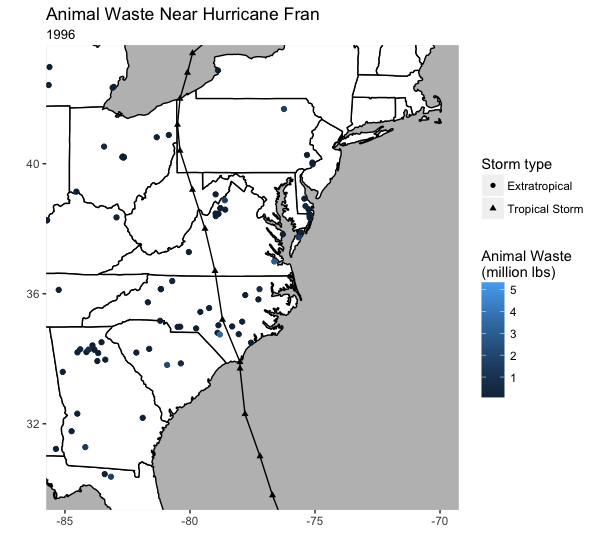 The TRI waste data shows facilities that produce large amounts of waste, and are by no means comprehensive of all the waste lagoons in any state, let alone NC (for which EWG made a very thorough map using state data). These maps provide some insight on where large deposits of waste are in the state, and what is in or near the hurricane path. 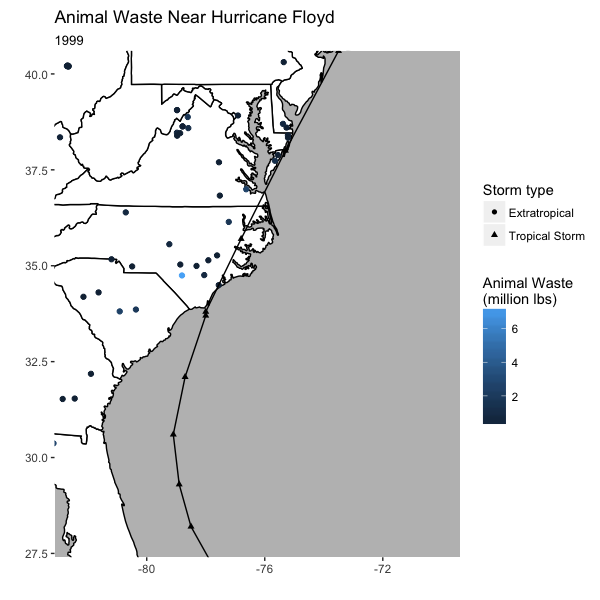 Throughout the years we see steady increases in the amount of waste producing facilities in certain areas, and also an increase in the upper limit of waste produced by a single facility. 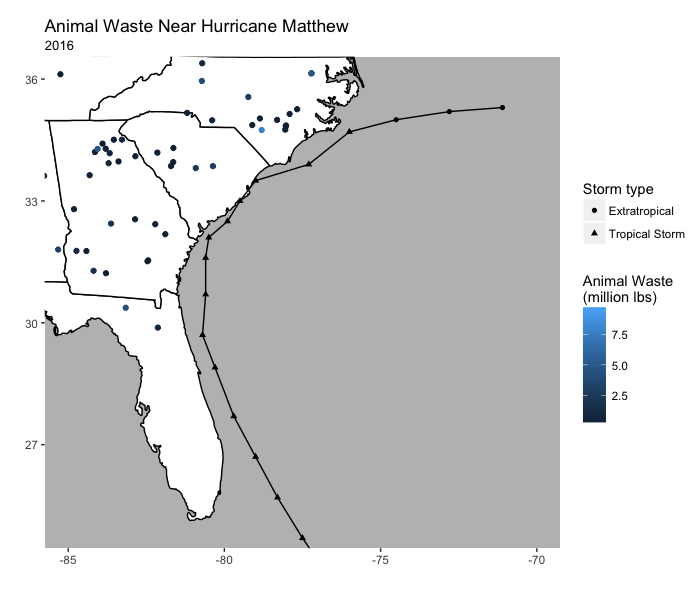 Note that while Hurricane Matthew did not directly touch North Carolina, it still breached lagoons. While the facilities that were producing the most waste created about 5 million pounds of waste in 1996, in 2016 these facilities produced around 8 million pounds. Post-Matthew, reports from the North Carolina Department of Agriculture & Consumer Services showed that 1.9 million agriculture birds had died due do Matthew, and that a $6 million grant from FEMA was given to aid in composting the carcasses and their potential public health risk. 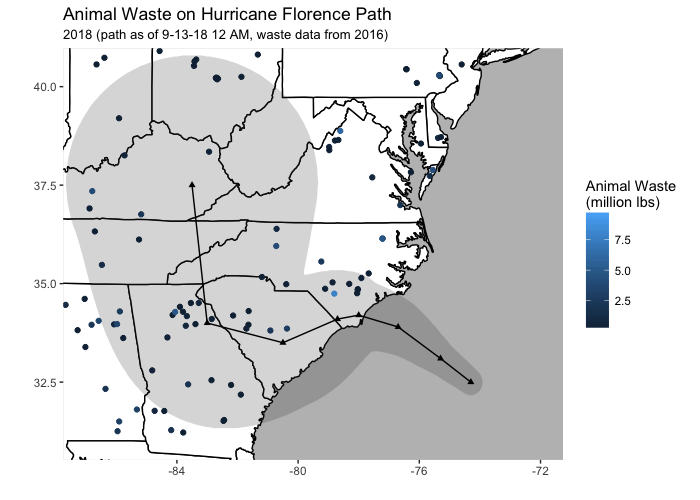 While the CEO of the NC Pork Council notes that regulations have prevented a new hog farm from opening in the past 21 years, it seems that the already existing factory farms have grown their business on their extant properties, and a few new ones that grow other animals have popped up in the area. The latest Hurricaine Florence path estimates suggest that big waste producing animal facilities will face damage in southern North Carolina, South Carolina, and northern Georgia.

All code used to make maps available at GitHub.